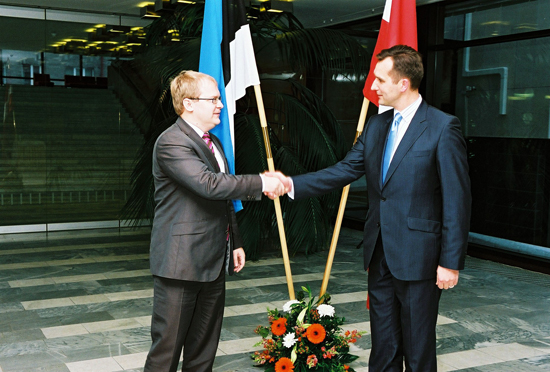 A handshake is common salutation in both informal and formal situations. 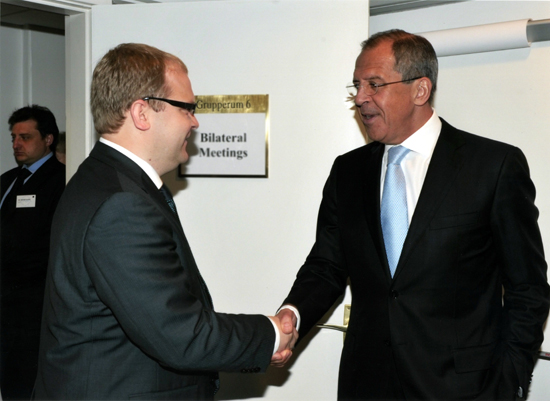 Estonians are by nature a friendly, warm, and effusive people. However, these sides of their personality are not traits Estonians easily show to strangers. In fact, until Estonians get to know someone well, they can come across as being slightly aloof and reserved. The cultural respect for personal space also keeps a distance of at least a half a meter between people in conversation.

Handshakes between friends are common, but often a slight nod of acknowledgement is also used in both formal and informal greetings. In addition, a slight wave of the hand from side to side is an acceptable greeting from a distance.

When speaking to close friends and family members, an Estonian uses the informal second-person pronoun sina (you) or its shortened form, sa. Typical greetings start with Tere/Tervist (Hello) or a salutation that is related to the time of day such as Tere Hommikust (Good morning), Tere päevast (Good afternoon), or Tere õhtust (Good evening). This is followed by a question about one’s health or well-being such as, Kuidas läheb? (How are you?). The informal response to this question is, Hästi. Ja sinul? (Fine. And you?).

When meeting someone in a casual situation, an Estonian may ask, Mis on sinu nimi? (What is your name?), to which the other person replies, Minu nimi on ___ (My name is ___). If the person speaking only gives his or her first name, a natural question following this statement might be, Mis sinu perekonnanimi on? (What is your surname?). After the conversation is over and it is time for friends to go their separate ways, they may say, Head aega, Hüvasti, Nägemist, or Jumalaga (all meaning "Goodbye").

As Estonia is a country that strongly values showing respect for others, a seated Estonian stands before greeting someone. The standard form of greeting is a firm handshake with direct eye contact accompanied by a verbal salutation. Although women are viewed as equals and their rights as such are protected by anti-discrimination laws, many Estonian women still wait for men to initiate the handshake in this patriarchal society.

Age and life experience are highly esteemed in Estonia, with the result that younger people are expected to initiate greetings with older ones. Titles are another important way to show respect, and include Arst/Doktor (Doctor), Professor (Professor), and Tegevdirektor (Managing Director), followed by the person's surname. The honorifics Härra (Sir), Prova (Madam), and Preili (Miss) may replace the title or be used in front of it. Estonians continue to use titles, honorifics, and surnames until invited to move to first names, usually by the elder or senior person.

Formal greetings mirror informal greetings when offering a standard “Hello” or salutation referring to the time of day and even when asking after a person’s health or well-being. However, in direct address, the formalitly of the language emerges. Instead of using the informal version of you (see above), Estonians use teie (you) or its shortened version, te when speaking to people they don't know well or those of higher social standing.

When asked Kuidas läheb? in a formal situation, an Estonian politely responds, Tänan, hästi. Ja teil? (I’m fine, thanks. And you?). If the person is a stranger, he or she might ask a follow-up question in formal language, such as, Mis on teie nimi? (What is your name?) or Kust te pärit olete? (Where are you from?). The response to the latter question is, Mina olen ___ (I’m from ___). To ask about someone's surname politely, an Estonian queries, Mis teie perekonnanimi on? (What is your surname?). Meeldiv tutvuda (Nice to meet you) is a customary phrase after introductions.

On leave-taking, Estonians wish each other, Ilusat päeva (Have a nice day).

Business greetings involve long handshakes, wordy welcomes, and extensive, though friendly, eye contact. The language tends to be more formal unless a personal relationship has previously been established.

Business cards are usually presented during initial meetings, but without specific protocol. They are treated with care and respect, however,.

Estonians enjoy talking about most subjects. Topics can be as innocuous as the weather or sports or move to potentially deeper subjects like current events or Estonian culture and history.

Estonians are proud of their national heritage and tend to be sensitive when lumped in the same category as Russians during discussions about the former Soviet Union. Additionally, most Estonians view themselves as Nordic as opposed to Eastern Europeans. Raising one’s voice or offering too many compliments makes the typical Estonian uncomfortable in a conversation.