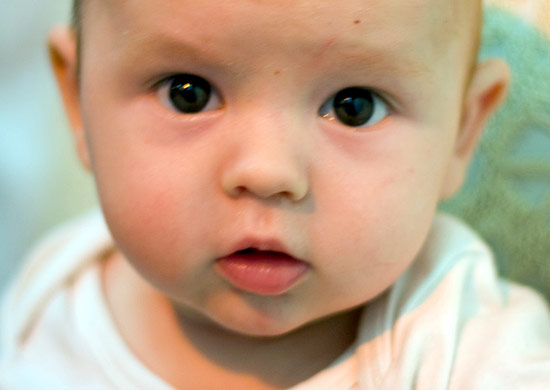 Christian Estonian families usually have their child baptized at two or three weeks of age.

In traditional Estonian society, expectant mothers were careful of a rather complicated set of taboos and dictates. It was considered bad for a pregnant woman to get angry or argue, on the assumption that her negative emotions would affect the baby. Pregnant women were also supposed to avoid laughing and working strenuously. If a child was born with any defect, the problem was blamed on something the mother did while she was pregnant. Many of these taboos are no longer observed, but some are still common beliefs. For example, many Estonians believe that if a woman touches a part of her body while looking at a fire, the baby will be born with a mole on that part of its body.

In the past it was considered bad luck to be born on certain days, and each day of the week had its own significance in bringing good and bad fortune to the child. Tuesday, Thursday, and Saturday were regarded as good days, and children born on a Sunday were considered especially fortunate. Babies born in the evening were considered lucky, while those born in the morning had to work hard to earn a living.

A new baby was traditionally swaddled in a piece of clothing that belonged to a person of the opposite sex. This was supposed to ensure that child would get married when he or she grew up.

Since the Reformation movement in the sixteenth century, the Lutheran Church has played a prominent role in shaping the Estonian life cycle. Combined elements of ancient beliefs and Christianity form the basis for the modern Estonian worldview, even though many modern Estonians do not practice any religion.

Almost all women have skilled attendants assisting during childbirth. The birth of a baby is always a cause for celebration, and visiting the mother and child after birth is a significant event. In the past, the baby’s first visitors were always local married women who usually brought a present for the baby or some food for the mother. Estonians considered it important for the baby’s first visitor to be young and wealthy. An initial visitor who was poor or old meant that the child would grow up to be poor. Today, these customs may not be observed, but friends and relatives still visit a new baby and bring gifts.

Christian Estonian families usually baptize their children at two or three weeks, and the time between birth and baptism is considered an important period in a child’s life. In the past, a christening feast that lasted for several days followed a baptism. Today, family and friends are likely to be invited for a party or a meal after a baptism.

Estonians celebrate birthdays, and some very traditional Estonians may celebrate a child’s name day in church, but this is relatively unusual. At one time, it was believed that giving presents to children might bring bad luck, but today that prohibition is no longer observed.